The Meaning of Weaning 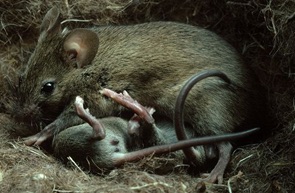 We have shown that the age at which animals are weaned has significant effects on their social development. Usually in the laboratory, mice are removed from their mothers at day 21 postnatally. We show that mothers will nurse and lick/groom their offspring beyond this period up to day 28 postnatally. During this fourth week postpartum dams will actively wean offspring by pinning and mounting them in response to pups’ nipple solicitations. The image shows a 4 week old pup sucking from its mother. We have also shown that female dams that provide less licking/grooming to their pups in the first week postnatally are more likely to actively wean their pups sooner. Pups that are weaned earlier exhibit increased levels of juvenile social play behavior likely as a compensatory mechanism for receiving less tactile stimulation early in life. Later actively weaned offspring are faster to exhibit other social behaviors. Further, early weaned female offspring are more likely to wean their own offspring earlier.

Video: Mouse dam mounting and pinning 24-day-old pup in response to nipple solicitation.  At this time, dams start to actively wean pups by decreasing the proportion of times that they allow suckling. Pups transition from engaging in suckling to side-by-side contact with the dam.